Posted on April 20, 2020 by thisihumblyspeak 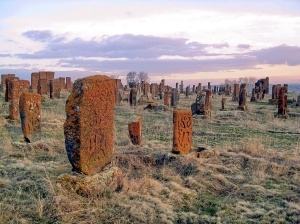 My father was born in 1910. He was one of the fortunate ones whose father had moved from Aintab to Aleppo after the 1895 Aintab massacres. He was raised in Syria, a country that had welcomed his parents until he moved to Beirut, Lebanon. Despite the hardships and death of other members of their families, my father never spoke of the Armenian Genocide of 1915 perpetrated by Turkey. He was raised in a home where memories were not welcome, a home with an unspoken past of genocide and exile. It was as though they were silenced by the horror; and guilt, the embodiment of anger directed toward oneself was the penance paid for the “gift” of survival. However, my father never played the victim. He held a happy disposition in life and took it upon himself to be well knowledgeable and well versed in the history of the world and the Armenians, and proclaimed through open letters that these horrendous acts had taken place by Ottoman Turkey and that there was retribution to be made for the 1.5 million lives lost.

In a box containing cassette tapes I found a recording of an interview with my father conducted by the Zoryan Institute. The tapes dated back to 1989. I knew they were always there but somehow, I had never listened to them. Perhaps I hadn’t wanted to hear the truth. I feared outrage and anger. I feared hearing hurt in his voice, a hurt that would cut through my own skin and I would be scarred like that hollow place that outrage and anger had carved in so many hearts. I feared I would hear a voice wounded too deep to mend. But what I heard was the wisdom of a man who could leverage knowledge with personal and collective experiences, a man who spoke with faith, with courage, with compassion and with confident truth in his heart. He said, (and I paraphrase) “that to understand the continued repercussions of genocide depended on how deeply the world understood that the permanent original sin committed by Turkey (even preceding the Holocaust) was a Genocide against all humanity. If original sin goes unpunished, what is the benchmark of our morality as a society and our ability to say no to evil?”….

….”As a people, it is not death that we fear, but fear of life without hope, without a dream, without an Armenian identity. The moral balance of the universe has been perverted and as Armenians, the one thing we fear is a world without justice.”

My father was right. Until Turkey finally accepts and redeems the moral debasement of their crimes against Armenians and against humanity, and until all leaders of the world practice the political will to courageously reject the denialist mentality and prosecute Turkey’s Erdogan, such blindness toward original sin will lead us into one war after another, one genocide after another – all stemming from a denial of Turkey’s own blood-stained origins. And yes, we learn about a country and a people by what they choose to deny in their history, a wickedness, barbarism and cruelty, a destructive nature that persist to this very day… as recently as October 2019 when with swift and brutal execution under Turkey’s Erdogan more than 275,000 Kurds in N. Syria were displaced and executions implemented. (Refer to  Pity the Nation, October 20, 2019)

As for the Armenians, their true nature as a people and a nation of builders and contributors has not faltered. We remember, we commemorate and we celebrate wherever we are. It is remembering that has defined us, allowed us to grow and to stay focused on the mission of justice for these past 105 years since that fateful day of April 24, 1915.

I believe we learn and we teach from remembering. April 24 is the day that provides a focus through national and local events and activities for people worldwide to think about the continuing repercussions of the Armenian Genocide and the recent Genocides of the world. This year, on April 24, in place of the annual March For Justice that brings tens of thousands of Armenians to the streets of Los Angeles and other major cities to call on Turkey to recognize their original sin, Armenian organizations and committees have united to launch a humanitarian fundraiser to provide 1.5 million meals to Americans in need through Feed America. Remembering and how we commemorate our losses and our gains says a great deal about the Armenians. It instills a sense of reverence and appreciation for the gift of life and connects us to our past with an omnipotent force.